The Xbox Elite Wireless Controller retails for $149.99 if you can find it. The Elite controller initially launched on November 22, 2015 but it has been really hard to find in stock. Even throughout the holiday season the Xbox Elite controller was never in stock at any of the retails stores I tried purchasing the controller from (Best Buy, GameStop, Target) nor was I ever able to find it online through Amazon. But finally, after 2+ months I came across the Elite controller in a GameStop and without hesitation purchased it on sight.

Let me start by saying the Elite controller is a must have for any gamer who wants to up their gaming domination in online play. The ability to map the buttons to meet your indivual play style is a huge plus for console gaming. Of course on the PC gamers have been able to do this for as long as I can remember? On the console the ability to do this is realitvely new, and while the Elite is not the first controller to offer this ability it is the first official Xbox controller from Microsoft that does allow button mapping with a new array of paddles on a Xbox Controller. While I have only had the Elite controller for less than a week, I will say that getting used to a new configuration is awkward but I can really see how this will elevate my game play. Especially in first-person shooter games, where I think the Elite controller will shine the most.

Customizing the Elite controller is easy as the D-Pads and Thumbsticks are magnetically connected to the controller and they easily pop on and off. When I say easily that does not mean they will pop off when gaming though. The magnets seem really strong in terms of keeping the Thumbsticks and D-Pad connected to the Elite controller at all time. I have yet to encounter an issue with either the D-Pad or Thumbsticks popping off accidentally during game play! The Thumbsticks come in three different sizes, in terms of height. There is a small, medium, and a large height Thumbsticks. The small (short) and large (tall) Thumbsticks have an indented top and the medium height Thumbsticks has a domed top. The D-pad which comes in two different sizes are configured as a traditional D-pad (cross shaped) and a circular D-pad which still functions as the cross shaped D-pad but makes it easier to function presses such as north-west (instead Kim and Kanye joke here), north-east, south-west, and south-east. My current configuration is large (tall) Thumbsticks and the traditional D-pad. I also have my A-B buttons mapped to the right paddle buttons and the X-Y buttons mapped to the left paddle buttons. 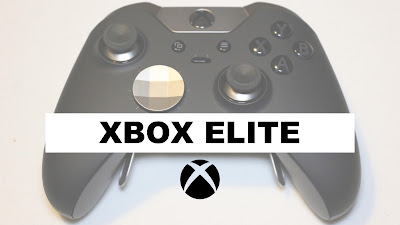 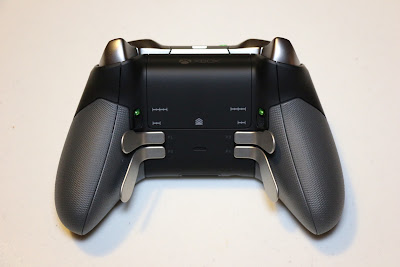 You also have the ability to set up multiple profiles for the Elite controller that will allow you to configure your Elite controller with different button mapping preferences. So let’s say you have configuration 1 for first-person shooter games and configuration 2 for MMORPG games. You can easily switch your desired controller configuration with the flick of a button. There is also a 3.5mm headphone jack on the bottom of the controller that will allow you to connect a set of headphones, along with the standard Xbox One Stereo Headset adapter jack that supports all Xbox One supported headsets. 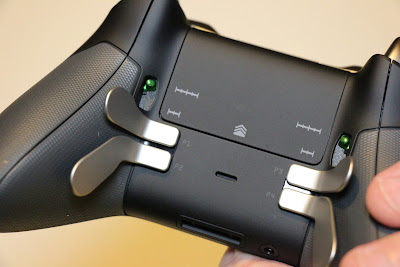 Overall the Elite controller is a huge win, I give it two enormous thumbs up! It is by far the best gaming controller I have ever used and in my opinion it is worth every dollar I have spent for it. I can't recommend this enough, if you are a serious Xbox or PC gamer then this is a must buy! 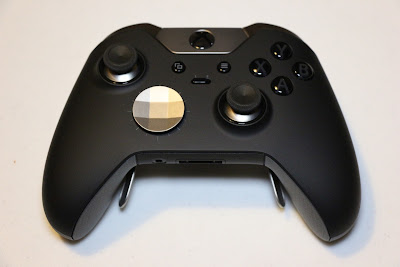 
PS: I didn’t mention anything about using the Xbox Elite Controller app for setting up the Elite controller for mapping buttons, configuring the lights on the Elite controller, or the haptic feedback which you can adjust in the app because I plan on doing a separate review about that in the next day or two. I will link to it here after I am finished with it.


If you have any questions feel free to leave a comment below. I will do my best to answer any questions about the Elite controller.

More information can be found on the Xbox.com website; http://www.xbox.com/en-US/xbox-one/accessories/controllers/elite-wireless-controller
By Unknown - January 25, 2016