I recently purchased a Topbest sun visor for my iPad (it will work with any tablet less than 9.7") to use my Phantom 4 controller. These visors are a must have, I previously wrote about the 5 items that I considered must have accessories and this is probably second only to extra batteries. When you are outside on a bright and sunny day it is really hard to see the iPad or iPhone screen, this visor helps tremendously with that. There is still some glare on the screen but it increases the visibility to at least 75%. You can still adjust your monitor holder to position it so the visor is shading your screen and sometimes you will need to do that depending where the sun is shining at in relation to where you are standing. 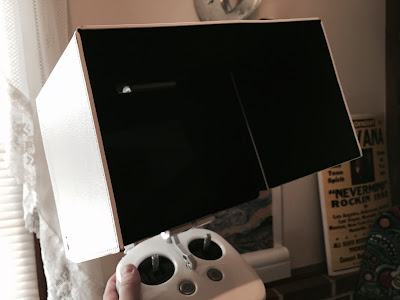 About the Visor:
It is made of a faux leather material and honestly I don't have much faith it will hold up very long in terms of looks, this cheap material will probably fade and start to show the black "rubber-like" material below the white coating. I didn't buy it for the looks so I don't consider it a huge issue. The visor has rubber suction cups where the iPad (tablet) goes and it really helps keep the iPad secure, you could literally flip it in the air and the iPad would not come detached from the visor, it works well.

There are velcro attachments on each side of the visor that connect to the base of the visor to keep the sides from flapping open while using. This visor has a really nice design and honestly I do not have any complaints about it. It folds up neatly for tucking in my bag when I traveling from location to location and fits perfectly on the Phantom 4 controller when using.

There are cutouts for running your Lightning cable through the side of the visor so you can connect it to the Phantom 4 controller. I also did not have any issue with raising the antennas on the back of remote controller, in other words the controller functions as it should when using this visor.

I don't consider this a negative because it is not an issue for me; but, it does make the controller feel more heavy — make that more top heavy. While it only weighs about 6 ounces, you can feel the difference when using it on the controller.

Phantom 4 visor is a must have. Still some glare — but it helps tremendously. pic.twitter.com/eowwkZQdM4