The top 5 Google questions about Drones and the FAA ruling 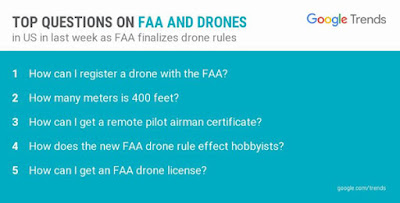 Drone360mag.com pulled in a list of the top Google questions about the new FAA ruling regarding drone usage and the Part 107. I personally think it is bullshit to have to pay $5 to register a hobbyist drones, but I understand why they are doing so. There are many people who use their Phantom or Parrot drones recklessly, having some sort of regulation to help those understand the dangers that could occur is a good thing I suppose?

I think for this to really reach the masses, the FAA will need to require retailers like Amazon, Best Buy, Walmart, Apple store, etc. require literature be given out with every purchase, then have the manufacturers also include info; both, notices written on the box, as well as informational pamphlets with the laws and regulations on the inside of the box. Most weekend hobbyist are not going to know about these legal requirements, not unless they keep up with the drone hobby itself. How many parents bought their kids drones without a thought in the world of needing a FAA certificate/number to fly it?