Why I returned the DJI Osmo

This is sort of a review of the DJI Osmo; as well as my thoughts on the Osmo and how I wished things had worked out. Before I get started, the entry level DJI Osmo retails for $569, that is what I purchased, so that is what I am reviewing. As with my Phantom 4, there are plenty of accessories for the Osmo as well, which will increase the price, some of the accessories are necessary in my opinion but not required, such as extra batteries. This is my experience with the Osmo and why I returned the Osmo after using it for about three weeks. 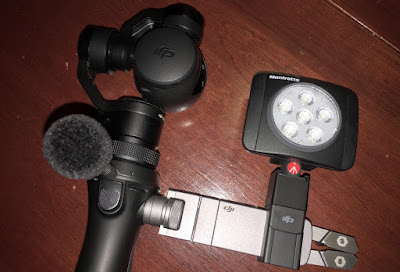 Let me start off with the issues I had with the Osmo that led me to return it, then I will talk about a few of the good things about the Osmo. First things first, the Osmo is sort of clunky to handle, along with being a tad on the heavy side, especially if you are using it with an iPhone 6s Plus or other large smart-phone. What I mean by clunky is if you are using the Osmo but need to set it down it starts beeping because the gimbal I suppose detects that it is not longer free-hanging (for lack of a better term) then when you pick it back up I noticed that it took a minute or so before it would snap back into place, or center itself. If you are in a shooting session, you may not have one or two minutes to wait for the hardware to be ready to go again. Of course not every situation requires me to lay the Osmo down, but this is just something I noticed when I happened to do so. I also noticed that my iPhone screen, while in the DJI Go app would go black for no apparent reason and I would have to wait for the app to relaunch as well. It is very frustrating when this happens, it always seemed to happen in a crucial moment. The screen blacking out might have been an issue with the Go app itself and maybe an update to the app or the firmware of the Osmo will address this?

I noticed several times that the gimbal would just stop working, I am not sure what is going on but the Osmo would just totally ignore any command from the thumb-stick or any action performed on the iPhone in the Go app. More or less the Osmo would become useless. I consistently had issues when using the iPhone as a view finder, the experience is really buggy — a totally different experience of that versus using my iPhone with my Phantom 4. Something else I noticed that seemed to be a major issue; a lot of times my iPhone display would be a second or two behind what I am filming (lag), which can be nerve-racking if you are trying to get a perfect shot but you can’t tell if your shot is framed properly due to the poor performance.

Which leads me to my one of may biggest gripes — I have no idea why DJI decided to connect the Osmo to the iPhone (or smart-phone) over WiFi versus a wired connection of some sort like I do with my Phantom 4. I feel this would have totally made the Osmo a much better experience versus doing everything over WiFi. Not to mention the fact that using the OSMO over WiFi means I have to default to cellular if I want to stream to Periscope or Facebook Live for instance. Heck, as unreliable as it is, I would almost rather connect via Bluetooth just to be able to stay connected to WiFi while using the Osmo. Again, I bring up the Phantom 4, which connects to the remote controller via Lightning cable and works flawlessly. Even the Phantom 4 video feed is sent wirelessly to the remote, but it works perfectly. I don’t think I have ever experienced any sort of feed lag? If I have, I have not noticed it.

Battery life — all I can say; it is not that as great as DJI claims, at least not in my experience. DJI claims about 1-hour and 30-minutes, I am lucky if I get half of that, I’d say about 50 minutes is what I was getting on average. I did not do an actual real-world time test before returning it, but I do know that I was not getting 90 minutes! Personally though, even only getting an hour is more than enough in my opinion for all the Osmo is doing with such a small battery. Just like my Phantom 4, I have purchased several additional batteries, luckily the Osmo batteries are much cheaper @ only $35 each. Even though battery life was not a determining factor in me returning the Osmo, it was another issue that I did have with the Osmo itself.

Shooting in low light is not that great, I didn’t consider this a deal breaker as I mostly shoot in well lit situations, but I feel I should mention this to anyone who is thinking about purchasing the Osmo. When I tested my Osmo in low light, the result was a lot of grain (expected) and I could never get it to focus on my subject in low light, or well lit situations; more on that in a bit. Of course the darks or shadows were way too dark as the Osmo didn’t perform as well as I would have liked. I read a lot of reviews before deciding to purchase the Osmo; so, I decided that low light shooting was something that I didn’t really need to worry about as I mentioned, I rarely shoot in low light.

Focusing is atrocious. It was probably the biggest issue and the deciding factor in me returning my Osmo. If I was just running and gunning, shooting large object that did not require me to focus on, it was fine. When I would try to pin point a subject, move in for a close shot, the Osmo just ignored focusing altogether, which is something that I required for my line of work. Again, this is probably something a firmware update might be able to address; but, it was something that I couldn’t wait for.

I really don’t think I need to mention this as every review you find online is going to say the same exact thing; the built-in microphone SUCKS! What DJI should have done was included the cold shoe for external microphones since the microphone that shipped with the Osmo is such a piece of poop. DJI does sell the quick release cold shoe and a small external Flexi microphone, both are cheap at about $10 each. I still have both pieces, maybe I will give them away to someone who needs them?

Ultimately, the Osmo failed in the 3 situations that I would consider maybe the most important situation in filming:

If you can’t focus, if you can’t frame your shot, and if you are constantly having audio issues with your camera, you might as well not even try filming anything.

I know it seemed like there isn’t much to like about the Osmo, but indeed there are. I think first and probably most importantly is the quality of the video output! Most of the videos I shot with the Osmo were fantastic looking, the panning was buttery smooth, the 4K looked fantastic when I uploaded test footage to YouTube and Vimeo.

The gimbal is really steady, even when walking without the Z-axis attachment. You can see a slight amount of bounce but to be honest it feels more natural when shooting certain situations. I would recommend purchasing the Z-axis if you do buy an Osmo — I did not purchase the Z-axis myself; but, I would have if I kept the Osmo. Back to the gimbal, it pans really smooth when using the thumb-stick to the control the camera when panning left to right it and keeping the camera locked onto my subject — I was extremely happy in both situations. North to south or south to north wasn’t as great as side-to-side, but it still looked fantastic when I did test using the Osmo in different shooting situations.

I also think the price is great for what you get, issues aside. For less than $600 you are getting an electronic steady cam with an awesome camera built-in. So if you can overcome some of the faults of the Osmo, then this is a great deal. For my particular needs, I just couldn’t ignore the issues I was having with the camera.

There are a ton of reviews on YouTube or online that praise the Osmo. I am not knocking it, I am just writing about the issues I had with mine. Maybe a firmware update will address some of these issues, such as the focusing being poor. I could fix the audio issue by recording externally. Maybe my Osmo was a dud? Maybe I just suck as a videographer?

I have seen plenty of reviews that praise it, but I have also read plenty of reviews that have the same gripes that I had with the Osmo I purchased. Ultimately, the tools we purchase have to work for our needs — if those tools don’t work as we need them to work then we have to find another tool that does. In this case, the Osmo didn’t work the way I needed it to work. I am sure if and when DJI releases a second generation Osmo that a lot of these shortcomings will be addressed. I am huge DJI fan, I own several of their other products and I will continue to be a fan and purchase more of their products in the future!