SW: Commander is a RTS style game that allows you to build defenses to defend against enemy attacks, upgrade heroes and offenses for attack on others players or in campaign mode as well as build resource farming units to help build those resources. This game includes in-app purchases that will allow you to speed up the “real-time” aspect of the game so you don’t have to wait for hours upon hours for defenses to finish upgrading. That also means that those who spend the most money are going to be the players who are atop the leaderboard which sort of takes the fun away from the game knowing that the only reason you are losing is because the other player most likely spent more money. You don’t need to spend money to enjoy the game, but spending money will offer a much better experience.

The balance in the game seems to favor the offense, it almost feels as it doesn’t really matter how I set-up my defense because I am going to lose to an equally ranked player and vice versa when I am on offense. I am not sure if this is by design, or maybe I am just a really good offensive attacker in SW: Commander? I have yet to lose an attack, while I have defeated every base 100%, I have defeated every base the required 50% to get the victory and walk away with the looted resources from the attack. 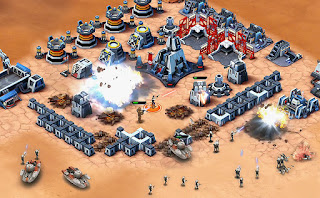 SW: Commander is free to download. It is fun if you like the Clash of Clan style games but want to play with characters from Star Wars. It is worth the free download but I wouldn’t spend any money with in-app purchases because you will never make it to the top without spending hundreds of dollars trying to catch the leaders.