Today I decided to splurge and buy a DJI Phantom 4 from Best Buy. I also bought a second battery as well as an additional pack of propellers, which came with two propellers in the pack. This isn't a full review as I have not had enough time to play with it yet, this is just a few of my thoughts on it after a few hours of toying with it and trying to learn how to use it.

Initial thoughts, just know I am super happy with it so far. It hovers really great and the 4K output is excellent (I did notice some rolling shutter) and the clips I did get look fantastic. This thing has a decent learning curve though as you have to control it with both the controller as well as a mobile device, I am using an iPad Air 2 but it also works with the iPhone and my Nexus 5X.

Setup was a pain, the documentation that comes with it is useless. Firmware updates, controller updates, drone updates, app updates... I had to do them all. So out of the box it took me a couple of hours to get everything setup and ready for flight.

I spent about 2 hours today just trying to get used to it and learn how to use the tracking (Active Track) which basically will track an object on the ground, the only downside I noticed was that it was limited to under 30 feet from the ground and as long as drone doesn't lose sight of whatever it is tracking. I followed a dog at the park by my house today, the dog was going nuts, but in a playful way.

Battery charing was slow, I am not sure how what percentage of battery charge was in the batteries (I have 2) but it took over an hour to charge them both, I assume they were around 35% charged out of the box? Same with the controller which took longer than both batteries and I am not sure it was even fully charged when I took it outside to play with it! I did get about 25 minutes or so of flight time out of each battery, and I landed the drone each time the battery got to about 20-%-25% or so. Also, the first time you set up your Phantom 4 you are going to need to activate and register your drone in the iOS / Android mobile app. Expect setup to take about an hour, or more than an hour if you factor in battery and controller charging times.

My best advice for anyone who is new to drones is once you get this or even before you purchase the Phantom 4, go to YouTube and watch as many videos on setting it up, connecting it to a mobile device, etc. I sort of wished I had done that to help alleviate some of the headache from trying to figure things out without reading the frigging manual first! Which as I mentioned above, the manual sucks!

This is a huge win, I can't wait to shoot video footage with this. Be sure to follow me on Twitter @crizzonet, where I plan to share footage as well as private links to my Vimeo page with drone footage as well. If you have any question fill free to leave a comment or reach out to me on Twitter. 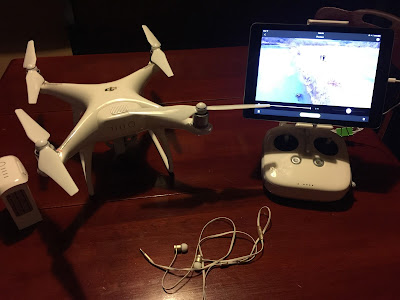 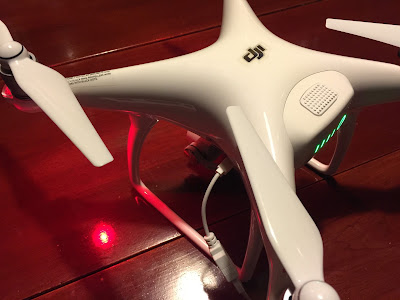