Just a few thoughts on wanting an iPad Pro; but, I would rather have a MacBook Pro that supported the Apple Pencil, at least in theory I would!

I’m in the market for an iPad Pro (12.9”); but, I’m going to wait until WWDC with the hopes Apple announces something new, I also know they’ll wait until the fall for an iPad announcement. I am just holding out hope we get something in a couple of months.

I still think the patent/rumor last year about the new MacBook Pro w/Touch Bar that would have a trackpad that supported the Apple Pencil (http://bit.ly/2ozR3BE) might be something we may see this year, it is surely big enough.

Then there is the patent showing an iPhone/iPad connecting to the MBP (https://goo.gl/HQQWru) as well, to be used where the trackpad should be. I think both of those rumors might be correct; but, I don’t think they’ll look like the diagrams at all.

Maybe a trackpad that looks and functions like an iPad/iPhone. The trackpad is already glass and the Touch Bar is already using iOS!

Anyway, I just want something that works without input lag, so I can draw and transfer my work easily to Illustrator. Yes, I know Wacom has some nice devices; but, the few I have owned have never really worked too great. The devices that Wacom does sell that I have heard nothing but great things about are really expensive, I am not that invested in my hobby to spend that type of cash for a device I will use casually. Plus, I live in an Apple world so I would rather have something from Apple, that is just my preference. 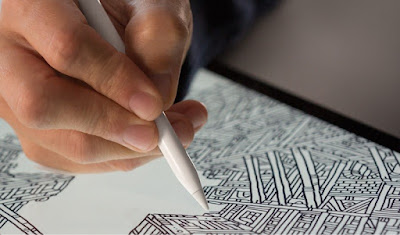